Understanding the Sleep of Ultra-Marathon Swimmers: Guidance for Coaches & Swimmers 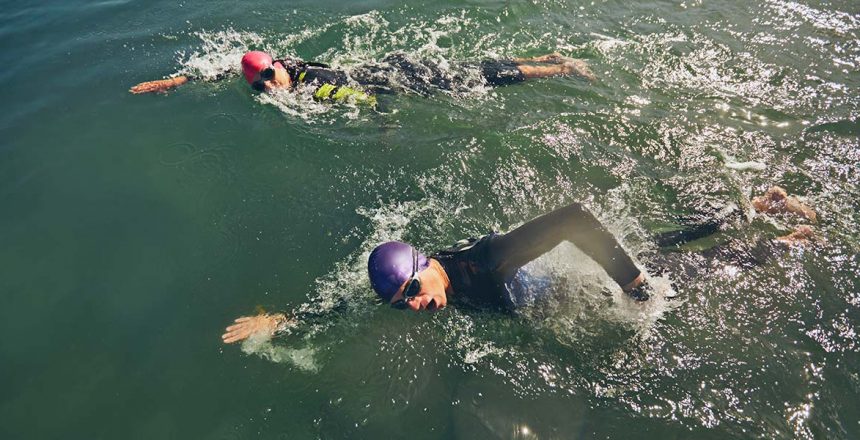 New research led by Ian Dunican has magnified how ultra-marathon swimmers sleep and which factors influence it. The longitudinal study follows 24 masters’ swimmers (average age = 39) during a 42-day training block in preparation for the South32 Rottnest Channel Swim. This 19.7km ocean ultra-swim takes place annually in Perth, Western Australia. This research will be disseminated in the article:

The study’s first aim was to outline the sleep behaviours of these ultra-marathon swimmers, something that had not been explored before this study. The research team collected 866 nights’ worth of the masters’ swimmers’ sleep data using Readiband, a state-of-the-art wearable sleep measurement device. Scientifically validated questionnaires were also given to the swimmers to screen for the potential prevalence of sleep disorders and chronotype (individual preference in time to sleep and perform activities).

The research group led by Dr Dunican showed that the swimmers slept for 6.8 hours on average per night, which is less than the 7-9 hours recommended by the National Sleep Foundation 1, while also spending 45 minutes awake during the middle of their night. Of concern was that 21% of swimmers were at high risk for Obstructive Sleep Apnea (OSA), a sleep-related breathing disorder that can have severe consequences if left untreated. Swimmers at increased risk for OSA also had shorter and poorer quality sleep, showing that OSA is trivial within the population of ultra-marathon swimmers.

In trying to understand some of the reasons behind the ultra-marathon swimmers’ sleep behaviours, the research group also gathered data on the groups’ anthropometric and lifestyle factors and training schedules. Digging into this data, the team found that swimmers slept five minutes less for every unit increase in Body Mass Index (BMI). Some ultra-marathon swimmers believe that increasing their BMI is beneficial as it can decrease the risk of hypothermia during their swim in cold water. However, the findings suggest this may be at the cost of some valuable sleep.

The masters-age swimmers completed two-morning training sessions per week, starting at 5:30 am and the other at 6 am. However, only one of the 24 swimmers was a ‘definite morning’ chronotype, which is the chronotype that is suited for early morning training. The dissonance between swimmer chronotype and early morning training times severely affected their sleep. On these early starts, swimmers woke up almost an hour earlier and lost 39min of sleep on average. Combined with similar findings in elite 2 & Olympic 3 swimmers, it is increasingly clear that the early-morning training culture within swimming does not marry well with the physiology of most swimmers.

A key takeaway is that ultra-marathon swimmers should avoid training before 6 am wherever possible. Speaking to Todd Johnston on the Perth radio station 6PR, Dr Dunican stressed that “delaying that early morning swim from 5:30 until 6 o’clock if you can or until 6:30 might be better to do if possible” (listen here). The study suggests that masters age marathon swimmers and coaches could benefit from considering sleep opportunities when devising training schedules. Those at risk of a sleep disorder such as OSA should seek guidance and treatment from a sleep physician.